Two 1982 Barolo tell their tales because another bottle had nothing to say.
​

This is the tale of two bottles of Barolo, opened in frustration when I very promising looking bottle on 1970 Massolino Barolo turned out to have nothing to say. I did not plan on writing this up, but as it turns out there were two messages worth communicating that came of this.

The first, and a sad message that I have yet to fully take to heart, is that the crossroads of age and poor storage has finally been crossed for what I will call very old Barolo. Very old being roughly 1971 and earlier in my book. I have had pretty bad luck with these wines over the past year. That’s not to say that there have not been some great successes. Unfortunately though my success were greatly outnumbered by my disappointments this last year, and the ration has grown notably worse over the years. It has come to the point that I am beyond hesitant to pull the trigger on these older wines. I’ll drink what I have but it seems that age and/or storage has compromised too many bottles that are coming through retail channels to make buying more a winning proposition, unless of course the price is right!

So I’ll dip my feet back in the market as a bottom feeder. I do really enjoy the very old examples of Nebbiolo that show well, but the second message worth communicating here is that we no longer really need to find the super old bottles of Barolo to enjoy these wines at their fullest expressions. 1974 is a vintage that has been brilliant for several years, generally flew under the radar for the longest tie, and still seems to be offering more positive than negative experiences. 1978 is great, but still on the young side, and both 1982 and 1985 are offering great drinking experiences today, even if they remain relatively young in the world of Nebbiolo.

A final thought emerged as I wrote this all up. How profoundly inadequate a single tasting note is for great wines. His is not a novelty, we all know it though we love to ignore its veracity. It’s just too easy to use the shorthand. Slap a score on a wine and throw in a few adjectives pronounced with finality then move on to the next wine, doing a disservice both to the wines and the readers of these notes. I’m as guilty as anyone on this front, but I’m hoping some self awareness can ameliorate the worst of my excesses.
​
Those are all the lessons of the day, what follows is the story of these two wines, each of which spoke so clearly and eloquently of their lives. Just one of the many reasons I love these wines so much!

Both wines were double decanted and I started drinking them four hours after the decanting.

There is a faded quality here on the nose, not so much tired, as dusty and reticent with an underlying base of amarena cherry, cured pork fat, and and fine dried violet accents with the vaguely vegetal quality of violets being quite pronounced. Hints of sweet tea and tar emerge with air.  Tannin is mostly resolved, though some powdery tannins remain on the palate, this is driven by its acid today. Quite flavorful and intense with citrusy, strawberry, and candied herbal tones growing on the back of the palate. Really quite a cone of flavor, starting at an acid pinpoint on entry then filling the mouth through the moderately long, seaweed and dried orange peel tinged finish. This is delicate and tart, a bit ragged around the edges as well, though another several hours of air should allow this to knit together more completely. Right now about an 88+

6 hours in
​
Aromatically this hasn't gained too much but it is changing, offering up very sandy soil tones along with dried vegetal and underbrush aromas that can be fairly typical of La Serra. In the mouth though there has been significant improvement, with this gaining a little fleshiness, great refreshing minerality, length and finesse. Transparent, light, and elegant with a fine balance that leans slightly more towards the savory than fruit with fruit that is light red and rich with dried citrus peel nuance. I don’t think there is any denying that this was better several years ago, though it continues to be quite satisfying gaining a dried strawberry note on the lengthening finish.  90pts 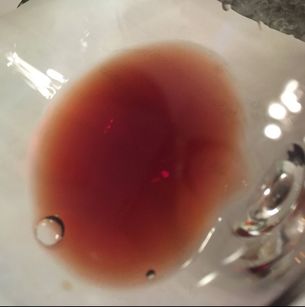 Ths has turned more floral with air and offers up a fine array of meaty,figgy,  iron tinged, sandy and lightly spicy aromas. Remaining smaller scaled, this is downright racy now with moderately intense red raspberry fruit, a touch of something dark and dried like figs, all packed in an increasingly seamless and lengthen palate impression. The tannins are asserting themselves a touch ore, lending a chalkiness to the palate, but they remain in harmony with the fruit and acid.  Really quite delicate and pure at this stage but nuanced and fresher than it appeared several hours ago. Earthy tea and tobacco tinged finale. 92pts

9 hours in and getting to the end of the bottle.

Smoky raspberry jam pops on the nose now, Now this is singing, still a bit lean and definitely on the downslope but with fruit gaining prominence and more buffering material emerging to lend this a certain silkiness in the mouth. Drink em if you got them, but when you do give them lots of time to reveal their secrets. 93pts

Pure strawberry and mint upon opening, this has turned dark and dank on the nose at this stage, showing damp wood and lots of mint aromas. Really lovely in the mouth with excellent balance, bright and juicy with tannins that are rounded, lending this a voluptuous character. The finish is long, carrying slightly jammy black cherry from the palate along with rose petal, tar, and that mintiness through a long and compelling finish. Showing just a hint of warmth through the finish, this is an excellent wine for a snowy day. Still rich and a bit chewy, this just lacks a touch of elegance to be truly compelling but that may come with a bit more air. Really stunning length 91+

6 hours in
​
Aromatically this is in decline, having peaked hours ago, offering up rotting wood, porcini, and balsamic aromas at this point. It’s not unpleasant nor atypical, but strikes me as a bit premature for this wine. The palate is showing signs of drying out as well, still has terrific depth of flavor and persistence in the mouth, but the fruit is fading faster than the tannins are softening leaving slightly rough going and drying sensations on the palate. The finish though remains captivating with dark dried fruit tones, with hints of rhubarb, leather and mint. 91pts 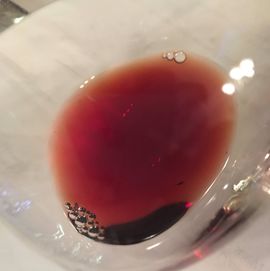 Minty and back to dank wood aromas all wrapped up in wet tobacco at this point. Still seamless and while less elegant than the Marcarini there is more substance here and a sweeter palate impression. The austerity is quite attractive, and this delivers the goods on the palate, though it’s a shame about the aromatics. The fruit retains a sweetness that offers the classic Barolo tension between tannins and fruit with a drive and energy that keeps me interested. Nowhere near the elegance of the La Serra.  91pts

Lightening somewhat on the nose with a light dried floral tone and less of the dominant and monotonous dank wood aroma. A little cherry and mint wrapping around tobacco at this stage. There’s a fairly strong iodine note emerging at this point as well, so while this is probably the most attractive this note has been all night it's also most likely poised for a bit of a crack up. And on the palate one can begin to see this thinning out and fraying around the edges. The flavors are still pure and bright, if less intense than before and without the length. The acidity is emerging as well, which lends this freshness but shows how the fruit is falling away. Pleasant with flashes of its previous self but definitely on the downslope. 89pts
At the end of the day the Marcarini proved to be both the better wine and just more fun to drink. That's not to take anything away from the Cordero di Montezemolo, which was a very fine expression of Villero. Either one would have been a star on their own, but in a comparative tasting one wine usually shines brighter!
Proudly powered by Weebly